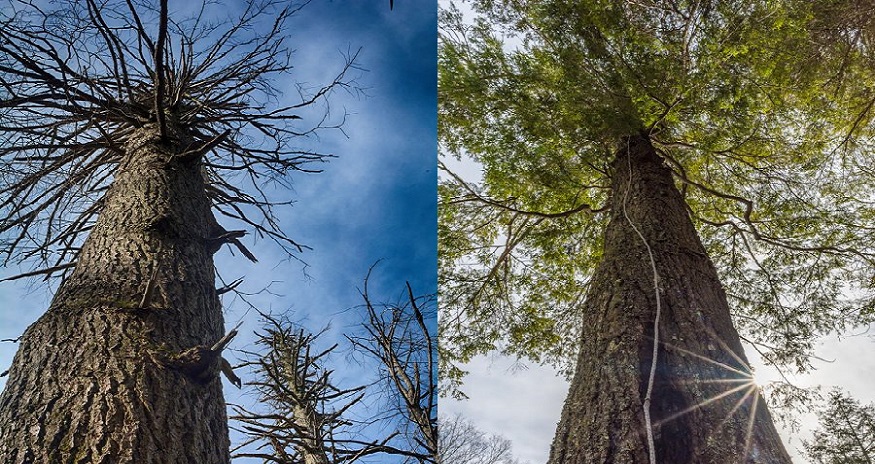 Forest Pest Hunters are trained community scientists who volunteer to adopt a trail or forest stand, which they then monitor for signs of priority forest pests and pathogens. Since its inception in 2021, more than 30 Forest Pest Hunters have annually surveyed more than 100 trails in the Adirondacks, resulting in more than 600 total observations. The data collected by these dedicated volunteers has been invaluable in helping APIPP and its partners document the presence of terrestrial invasive species throughout the region.

We need you! A science background is not required to be a Forest Pest Hunter; in fact, anyone can learn how to participate by attending or viewing one of APIPP’s free trainings or webinars.

Hemlock woolly adelgid (HWA) is an invasive forest pest responsible for killing hemlock trees across the eastern United States. You can help protect the future of Adirondack forests by supporting early detection efforts and reporting new locations, as well as locations that remain free of, of this harmful insect. Become a trained community scientist and adopt trails or forest stands to survey for HWA. The scouting season typically runs fall through late winter, and is based on insect activity from year-to-year.

Beech leaf disease (BLD) kills both native and ornamental beech tree species, which is cause for concern since beech trees are prevalent in Adirondack forests. BLD was first identified in Ohio in 2012 and much about it, including the full cause of it and how it spreads, is still unknown. The disease is believed to be associated with a nematode, Litylenchus crenatae mccannii, but scientists have a lot to learn and data collection is an essential part of the process. The telltale banding between leaf veins, as well as browning and curling of leaves caused by BLD, is best observed from early summer to fall.