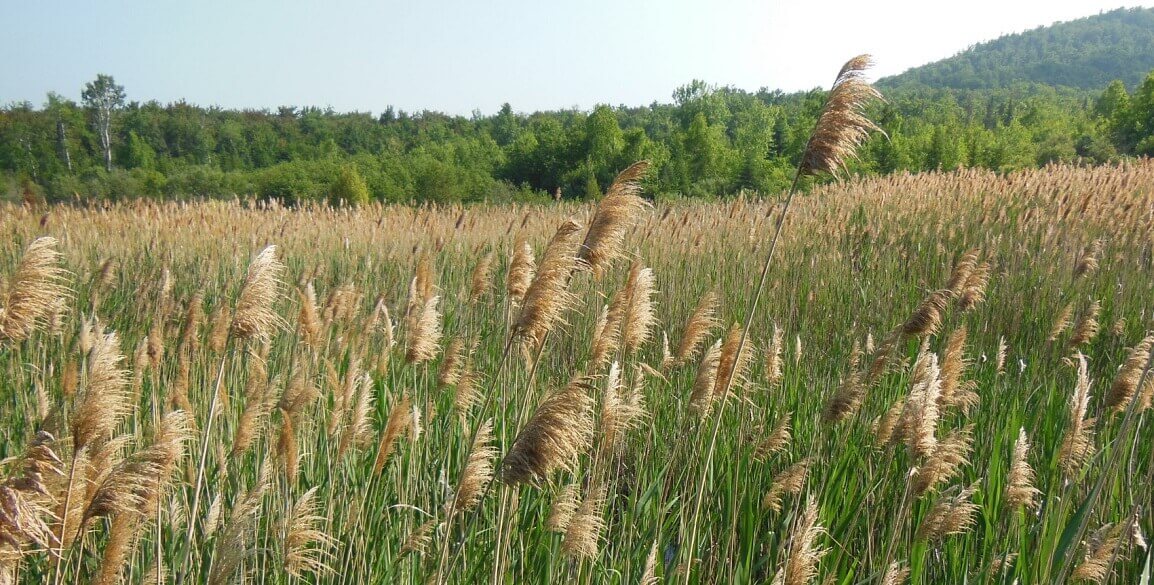 Keene Valley, NY (August 10, 2017) – Practitioners from the Adirondack Park Invasive Plant Program (APIPP) and researchers from Cornell University published the results of a seven-year study evaluating management of Phragmites australis (Phragmites), an aggressive wetland invasive plant, in the Adirondacks. Published in the latest issue of Biological Invasions, “Management of invasive Phragmites australis in the Adirondacks: a cautionary tale about prospects of eradication,” is the first to document broad success in controlling the species and suggests that over 70% of infestations within the interior Adirondacks will eventually be successfully eradicated, allowing native species to recolonize.

The study sets specific infestation-size thresholds that can help managers determine eradication probability. Results indicate that while there is a high probability of eradicating small infestations, as infestations expand in size, eradication becomes nearly impossible; thus, highlighting the importance of early detection and rapid response.

Co-author Dr. Bernd Blossey of Cornell University, notes, “Despite enormous expenditure, land managers trying to prevent negative impacts by invasive plant species rarely report on treatment outcomes. Even fewer report results beyond the initial year after treatments have taken place. This paper is unique in its scope, thoroughness and length of investigation to assess outcomes. It offers some hope for eradication of small populations. But at the same time it also delivers some sobering news that for larger infestations containment and suppression will require long-term and annual commitments of resources.”

Invasive Phragmites, also called common reed grass, is one of the most aggressive and pernicious wetland invaders in the world. It overtakes wetlands and roadsides throughout the Northeast, with the largest known infestation covering over 5,000 acres in New Jersey. Reaching heights of 15 feet, it grows into dense monotypic stands that can crowd out native plants and wildlife, block scenic views and lines of sight, increase highway maintenance costs, and reduce property values. The Great Lakes region alone has spent over $25 million dollars in attempts to control its spread since 2010. Phragmites occasionally reproduces by seed, but is more commonly spread through root and stem fragments. For instance, plant fragments can be spread easily through contaminated fill and mowing practices, making highway maintenance technicians the first line of defense in preventing Phragmites’ spread. To curtail accidental spread, APIPP has been collaborating with the New York State Department of Transportation and local highway departments to train highway crews on best prevention and management practices.

APIPP’s Manager, Brendan Quirion, initiated APIPP’s comprehensive Phragmites management efforts featured in the study. He notes, “We knew that there was promise for widespread control of this species in the Adirondacks back in 2010. Now after nearly a decade, the fruits of our labor are being realized and we are demonstrating big returns on investments made in prevention, early detection and rapid response. Our commitment to evaluating outcomes allows us to adapt and improve our control methods over time as well as share these successes and lessons learned with others. We are grateful for the support of New York State and private foundations as well as to our co-authors for their assistance in publishing this work, which demonstrates what is required to address a species invasion at a pace that exceeds the problem.”

Everyone can help protect the Adirondack region from the negative impacts of Phragmites and other invasive species. These are some of the ways to get involved:

·         Learn to identify, report, and manage infestations through an APIPP training session

·         Always use clean fill and mulch for landscaping and construction projects

·         Use native plants for gardening and landscaping.