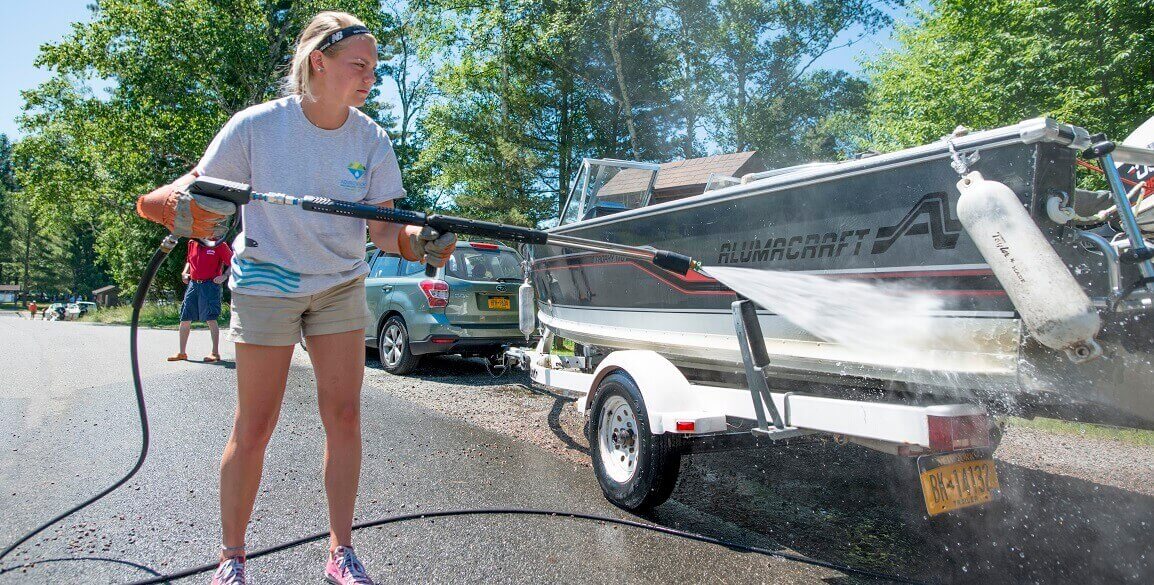 A new report examines the issue and recommends actions

Keene Valley, NY (May 14, 2104) – A new report—Boat Inspection and Decontamination for Aquatic Invasive Species Prevention: Recommendations for the Adirondack Region—is now available to help guide decisions on where to prioritize actions to prevent the spread of harmful aquatic invasive species (AIS). This first-time analysis for the Adirondack region summarizes the best available science, analyzes current AIS distribution and boater use patterns and recommends initial locations to consider integrating boat inspection and decontamination to prevent landscape-level spread of AIS.

Preliminary waterways that are prioritized for boat launch steward inspection and decontamination include Lake Champlain, Great Sacandaga Lake, Lake George, Saratoga Lake, Chateaugay Lake, Fourth Lake, Lake Flower, Second Pond, Long Lake, Tupper Lake, Peck Lake, Sacandaga Lake and Stewarts Bridge Reservoir. These waterways were selected because they either serve as invasion spread hubs (waterways that have AIS, are popular boating destinations and have boat traffic traveling to uninfected waterways) or linkage waterways (waterways that connect networks of lakes commonly accessed by boaters) and/or have aquatic invasive small-bodied organisms (e.g. spiny waterflea). (As data gaps for certain areas of the park are filled, additional waterways are likely to be added to the priority list over time.)

The report stresses the importance of strategic action and recognizes the unique opportunity afforded by the Adirondacks to successfully prevent region-wide spread of AIS. “Right now there are more invasive-free lakes than infected lakes in the Adirondacks, and that’s what puts us in such an advantageous position to make a large-scale difference,” said Hilary Smith, Director of the Adirondack Park Invasive Plant Program and report co-author. “We must work to keep the odds stacked against invasive species and in favor of healthy waters.”

According to the report, nearly 90 waterways in the Adirondacks are known to be infected with one or more AIS, such as Eurasian watermilfoil, curly leaf pondweed and spiny waterflea, while more than 230 waterways are free of AIS.

Recreational boating is a primary pathway for spreading AIS among inland waterways. Aquatic plants and animals can “hitchhike” on watercraft, trailers and gear. Studies show that performing a visual inspection for aquatic plants and removing them by hand is as effective as high-pressure washing (88% +/- 5% compared to 83% +/- 4%); however, high-pressure washing is 20 to 25% more effective at removing small-bodied organisms than low-pressure washing or visual inspection (91% +/- 2% compared to 74% +/-6% and 65% +/- 4%, respectively).

“Adirondack residents and resource managers have recognized the threat AIS pose to individual waterways for decades and responded proactively on a site by site basis. Unfortunately, this is not enough,” said Dr. Eric Holmlund, co-author and Director of the Watershed Stewardship Program at Paul Smith’s College. “We are beginning to understand the patterns of recreational use that connect Adirondack waterways in a web of shared exposure to invasives. It is a landscape-level system; we need a systematic, regional response. Our preliminary findings are an important step toward that goal,” said Holmlund.

“This report provides science-based guidance for the region on not only what to do but also where to do it,” said Emily DeBolt, co-author and Outreach Coordinator for the Lake George Association. She added that, “The report does not advocate for mandatory or voluntary programs. It’s worth noting, however, that the boat inspection and decontamination program being put into place this boating season on Lake George—a separate effort—will provide an important example of a mandatory program.”

“The analysis in the report is valuable not only to the Adirondacks and Lake Champlain Basin but also to other states across the country wrestling with the challenge of AIS and finding effective ways to protect waterways. The approach of combining AIS distribution, boat launch steward data and scientific principles can be broadly applied by others,” said Meg Modley, co-author and AIS Management Coordinator for the Lake Champlain Basin Program. Modley is also a member of regional and national efforts to address aquatic invasive species.

Prevention is more cost-effective than management, which can cost millions of dollars each year.“Preventing the spread of AIS is critical. Our local economies are fueled by the quality of waterways and the property values and recreation they support,” said Fred Monroe, Supervisor of Town of Chester and Executive Director of Adirondack Park Local Government Review Board. “This report is instructive to communities by outlining prevention actions that will help stop harmful AIS from spreading to new waters.” Coordinating prevention programs at a regional scale, and ultimately a state-wide scale, is necessary to be successful.

“We look forward to working with agencies, communities and the broad array of stakeholders necessary to implement an effective AIS prevention program in the Adirondacks,” said Smith.

Aquatic invasive species are plants and animals that are not native and cause harm to the environment, economy and human health. The Adirondack Park Invasive Plant Program (APIPP), Paul Smith’s College, Lake Champlain Basin Program and Lake George Association prepared the report, with input from the Adirondack AIS Committee, composed of lake associations, state agencies and not-for-profit organizations.