Keeping Aquatic Invasive Species Out of the Adirondacks 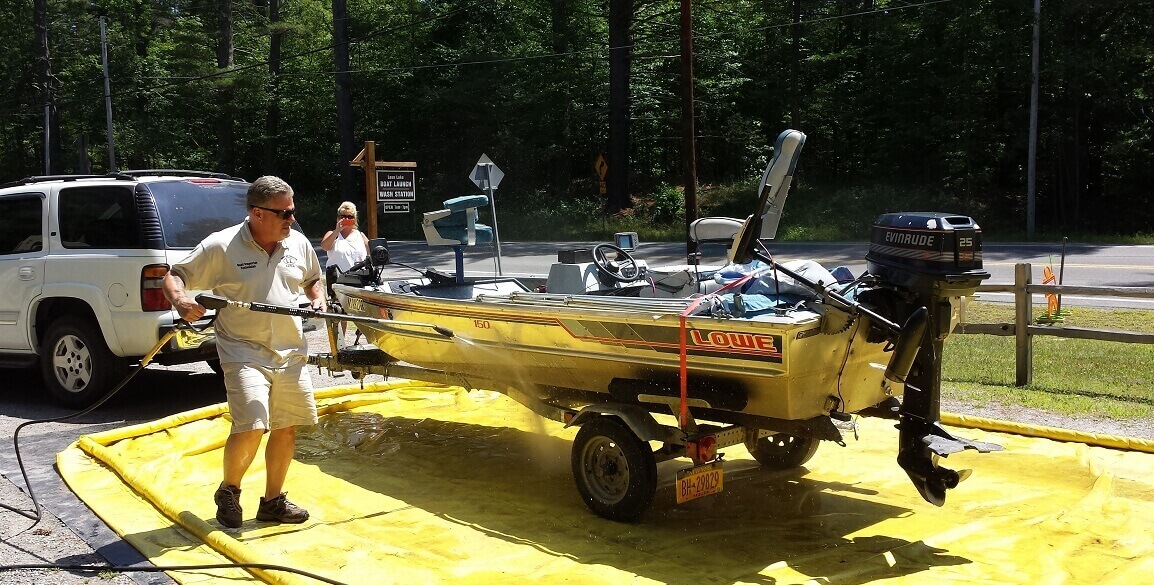 Keeping Aquatic Invasive Species Out of the Adirondacks

No newly invaded lakes documented in 2017; combination of efforts necessary and effective

Keene Valley, NY (February 20, 2018) - For the first time in a decade, no new Adirondack lakes were reported to be infested by aquatic invasive species (AIS). This highlights the importance of spread prevention efforts to protect Adirondack waters from the harmful economic, ecological and social impacts of AIS and reconfirms the value of continued monitoring. With nearly 75% of Adirondack lakes surveyed for AIS found to be invasives-free and only 12 species present in interior lakes, the Adirondacks is one of the few places where the odds are high for keeping invasive species out of our cherished waterways.

Since 2002, The Nature Conservancy’s Adirondack Park Invasive Plant Program (APIPP) has deployed hundreds of volunteers to track the distribution of AIS in the region. Additionally, with funding through New York’s Environmental Protection Fund, APIPP has more recently deployed professional rapid response teams to bolster lake surveillance and monitoring efforts. APIPP has produced a new map to showcase the results of surveys to date and the hopeful story for Adirondack lakes.

"A real opportunity exists in the Adirondacks to protect against widespread degradation by AIS. Detecting infestations early can lead to removal when the likelihood of successful eradication is highest. Everyone who lives or recreates in the Adirondacks plays a critical role in protecting our waters from AIS,” said APIPP’s AIS Project Coordinator, Erin Vennie-Vollrath.

"Eric Holmlund, Director of AWI’s Stewardship Program, remarks, “This finding of no newly invaded lakes in 2017 will be a huge shot in the arm for our stewards during the 2018 boating season. This is the best possible message we can share with boaters in 2018 - that the public's efforts to stop the spread of AIS are working, are worth it, and are making a difference in the quality of the lakes we all cherish.”

"APIPP and its many partners attribute the success of these collective actions to New York State’s increased investments in AIS prevention and lake monitoring efforts in the region. In 2015 Governor Andrew Cuomo announced an unprecedented agreement among 53 New York State organizations to prevent the introduction and spread of AIS in the Adirondacks.

"Lake Champlain Basin Program AIS Management Coordinator, Meg Modley, shared her enthusiasm, “As an organization that strives to support AIS spread prevention in the region, the Lake Champlain Basin Program is thrilled that APIPP is reporting no new lakes have been found to have invasive species in 2017. It is a great reminder that we have many, many uninvaded lakes in the Adirondack region that we will continue to work hard to protect.”

"AIS are aquatic organisms, introduced to lakes and rivers outside their native range, that proliferate quickly and cause significant harm to the local environment and economy. AIS are often unintentionally moved from one lake to another on boats and their trailers. Some local examples of AIS include Eurasian watermilfoil, zebra mussels and spiny waterflea.

"While it is important to pause and celebrate this victory for Adirondack waters, the organizations working to keep invasive species out of the Adirondacks know their work is far from over. "Holding the line on invasive species requires the strongest possible prevention measures coupled with preemption, stopping invasives before they reach our shores," said Eric Siy Executive Director of The FUND for Lake George. “Thanks to the growing commitments being made throughout the region and vital leadership from Governor Cuomo, APIPP's latest news shows this two-fisted approach can work.”

“Our water resources are among the most defining characteristics of the Adirondacks and the most cherished by people. The health of our Adirondack lakes depends on all of us, and these results show that we can make a real difference in this globally important landscape,” said Peg Olsen Director of The Nature Conservancy’s Adirondack Chapter.