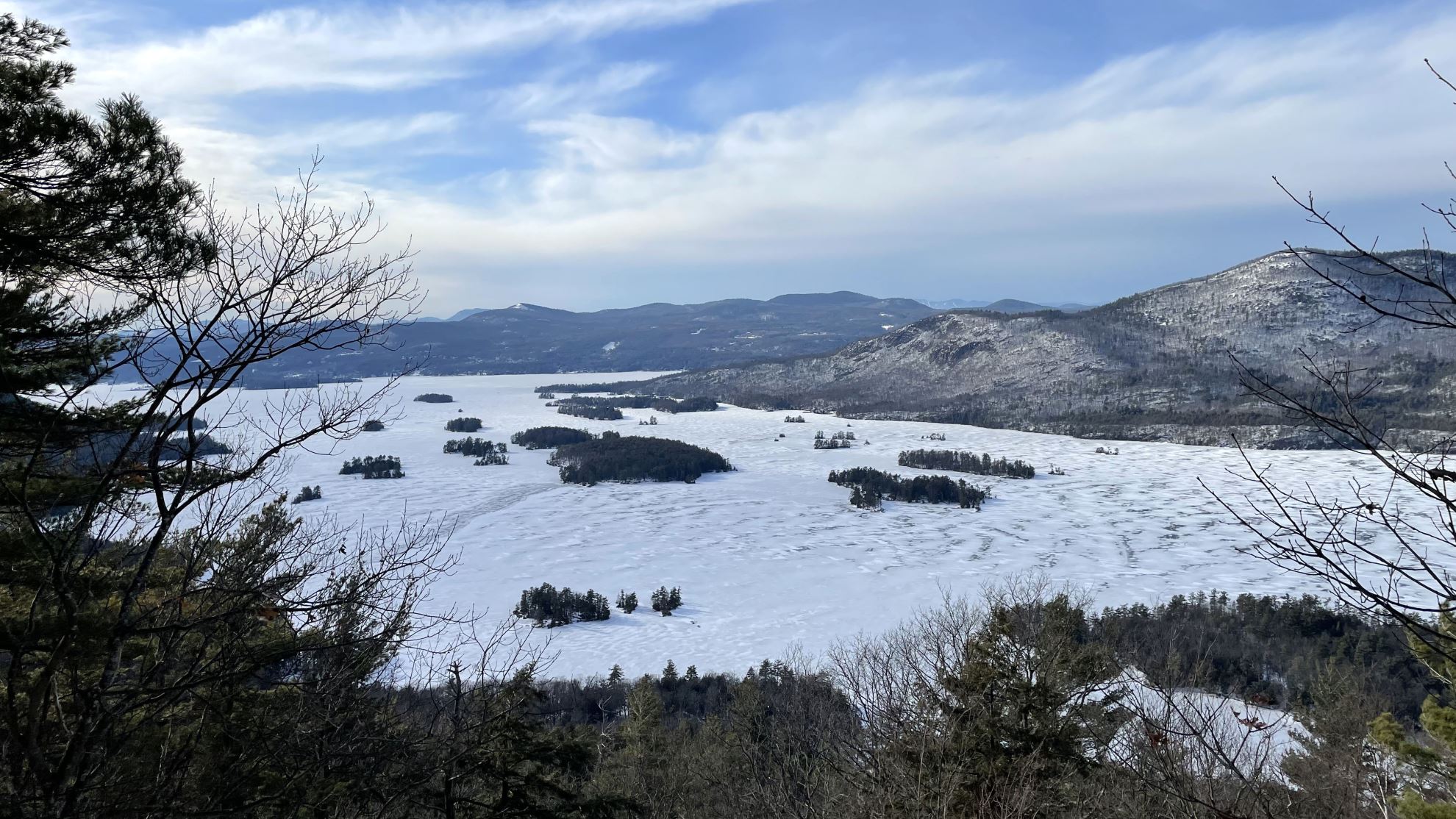 Widrig was among the first to join the Adirondack Park Invasive Plant Program’s Forest Pest Hunters effort when it began in 2021.

“Our property on the lake has old growth hemlock, some over 200 years old, that are very special to us,” Widrig said. “As hemlock woolly adelgid is a threat to these trees and all other hemlocks in the Northeast, I felt that I could not in good conscience just stand by and do nothing to help stop the spread of this pest.”

Hemlock woolly adelgid (HWA)—an invasive insect that lays its white, woolly egg sacks on the underside of hemlock needles—was first confirmed in New York state in 1985 and in the Adirondacks in 2017. In fall and winter, the invasive adelgids feed on young hemlock twig tissue, typically killing the tree within 10 years.

Hemlocks are an integral component of Adirondack ecosystems. To help protect them, APIPP regularly teams up with other organizations to train Forest Pest Hunter volunteers how to identify and report HWA and other forest pests.

The first Forest Pest Hunters training of 2023 will focus on HWA and be held online from 10-11:30 a.m. on Jan. 24. It will feature speakers from APIPP, New York State Hemlock Initiative, Adirondack Mountain Club, iMapInvasives and the Capital Region Partnership for Regional Invasive Species Management.

Since the program’s inception in 2021, Forest Pest Hunter volunteers have logged 550 invasive species reports into iMapInvasives, New York state’s online invasive species database. Of those reports, Widrig has entered more than 250 non-detects and 30 positive HWA sightings. Last fall he also entered more than 40 non-detects for beech leaf disease, an invasive forest pathogen that was first confirmed in Herkimer County in 2022.

APIPP Terrestrial Invasive Species Project Coordinator Becca Bernacki explained that non-detects—that is, surveys in which no invasive species are found—are just as important as positive sightings because they help scientists and invasive species managers see the big picture.

“Non-detects are vital to our understanding of the distribution of invasive species, allowing us to better target both survey and management activities,” Bernacki said.

“The Adirondack region is huge, and it’s impossible for us to be everywhere,” Bernacki said. “Having volunteers like Bill out there means more eyes on the ground and more occurrences of invasive species being reported. APIPP simply wouldn’t be as effective as it is if there weren’t so many dedicated community scientists surveying forests.”

Widrig doesn’t always conduct surveys alone. He has recruited his wife and children to help him, and he said that any amount of time a person can contribute—a day, half a day, or a couple of hours—makes a difference.

Widrig said there are other perks, too. The exercise is great, and surveying for invasives has helped him discover hidden locations he might not have otherwise found.

“I often find myself working adjacent to a trail or off-trail while surveying,” Widrig said. “In doing that I’d say I’ve had the chance to see vistas, viewpoints, rock outcrops, streams, and impressively large trees in a way that you don’t typically get while hiking. Many of those instances are memorable to me.”

APIPP’s mission is to work in partnership to minimize the impact of invasive species on the Adirondack region’s communities, lands, and waters. Learn more at www.adkinvasives.com.