APIPP Unveils 2021 Annual Report: Major Advancements Made in Protecting the Adirondacks from the Negative Impacts of Invasive Species 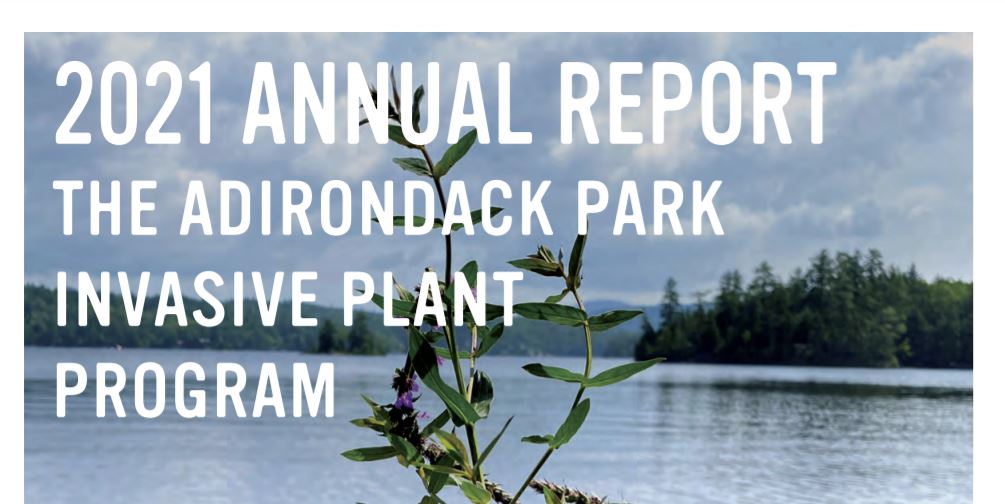 APIPP Unveils 2021 Annual Report: Major Advancements Made in Protecting the Adirondacks from the Negative Impacts of Invasive Species

“For well over two decades, the APIPP team has worked tirelessly to protect the Adirondacks from the negative impacts of invasive species. Last year we brought new partnerships and scientific innovation to bear in the fight against terrestrial and aquatic invasive species. We are grateful to our expansive network of partners and to our community volunteers for working alongside us to safeguard our unique Adirondack lands and waters,” said Tammara Van Ryn, APIPP Program Manager.

•    APIPP’s network of aquatic invasive species (AIS) monitoring volunteers and contractors submitted a near-record number of 131 reports for 110 lakes. The percentage of lakes where observers found AIS was 22.7%, which is lower than the five-year average. No new infestations of invasive small-bodied aquatic organisms were found. Over 75% of the 463 Adirondack waterways monitored over the last 20 years are AIS free.
•    Staff, partners, volunteers and contractors surveyed 38 NYS Department of Environmental Conservation (NYSDEC) campgrounds, over 130 recreational access points (such as trailheads and boat launches), sections of over 30 Forest Preserve units, and part or all of over 40 state and county road corridors for terrestrial invasive species. Approximately 460 new terrestrial infestations were found, bringing the total number of mapped infestations in the Adirondack region to 6,478.
•    APIPP managed 734 infestations of 14 terrestrial invasive species and documented the absence of invasives at 1,484 historically managed infestations. APIPP’s efforts have eliminated invasive species at approximately 40% of sites managed.

•    Garlic mustard abundance at NYSDEC campgrounds in the Adirondacks has decreased by 78%since management efforts began ten years ago, and the species has been locally eradicated from six campgrounds, which indicates that management efforts are working well.
•    APIPP staff, contractors and volunteers surveyed more than 550 sites for hemlock woolly adelgid (HWA). Many of these on-the-ground surveys were targeted to specific locations thanks to an innovative new approach from the sky. APIPP is collaborating with the City University of New York (CUNY) Advanced Science Research Center to remotely detect HWA using freely available remote sensing data. While airplanes and satellites cannot detect the insect itself, they can be used to detect changes in tree heath that may be associated with HWA presence. This information can help APIPP more strategically deploy on-the-ground surveyors and expand early-detection efforts.
•    Two new infestations of emerald ash borer were confirmed within the Adirondack Park. Thanks to partnerships with private and nonprofit landowners, APIPP established five long-term study sites to monitor ash trees for resistance to emerald ash borer, with the hope of finding resistant trees for future plant breeding programs.
•    APIPP’s new “Protect Your Forests” and “Protect Your Waters” outreach materials were provided to over 100 businesses and organizations and the posters and brochures are available at more than 250 locations. APIPP partnered with two dozen organizations to deliver more than 30 invasive species presentations which reached nearly 1,700 people.

HWA is killing eastern hemlock trees from the Great Smoky Mountains to the Catskills and was first found in the Adirondack Park in 2017. Citizen scientists can help determine how far HWA has spread. Join APIPP and partners on Wednesday, February 16 from 10-11:30am for a virtual workshop about HWA and how you can help survey for this invasive insect in the Adirondack region. This workshop will cover basic identification, survey techniques, and how to sign up for a trail to survey between now and April 15. (Surveys stop for the season after April 15 to avoid the inadvertent spread of this invasive species.) Once trained, volunteers can join one of the guided surveying field trips below or can start surveying on their own right away.

More information can be found at https://adkinvasives.com/Events/